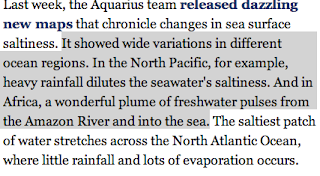 "It showed wide variations in different ocean regions. In the North Pacific, for example, heavy rainfall dilutes the seawater's saltiness. And in Africa, a wonderful plume of freshwater pulses from the Amazon River and into the sea."

Did someone move the Amazon to another continent and not tell me?

The depressing part is that this is PBS who made that mistake. I practically expect CNN or Fox to say crap like this.

Maybe this is the mythical Amazon river, near where the women warriors live. That might be in Africa. That's sometimes is in cheap pulp fiction from a century or so ago.

Damn it. Now I'm really craving that South American fusion place in the city (it has "Amazon" in the title). And we could totally go, except we already have a city trip planned for next week. I wannnnnnt plantaaaaaaaain chips.

Gondwanaland for the win!

Dr. K--the only reason Fox knows that Africa exists is that Obama was born there :).

Dame Eleanor--that's it! I was thinking maybe the mistake happened because the two do look like flipped versions of each other. Not the worst mistake I've seen in Internet journalism, right?

Stupid Africans: suffering from drought when they have the Amazon river!

H'ann--yes, when they could be harvesting all those greens in the rain forest.