Lifehack (link via Lifehacker)has some tips for concentration. Some of them are a lot like what I stumbled upon as part of the Internet experiment (which I am still using on weekdays but not on weekends, as you can see by the time of this post). Among them:

# 1. Cut off the noise. Comment: Turning off the Internet until 5 has had a huge effect on this.
# 8. Isolate yourself (ha!). Comment: Too much of this isn't good, though.
# 9. Healthy body, sharper mind. Comment: All the early morning exercise really has helped with concentration.
# 10. Be patient. Comment: The writer says that when you sit there for 15-20 minutes before you start writing, you'll have an impulse to do something else instead, which you should resist. For me, checking e-mail and surfing the web was my go-to means of breaking that unbearable pause when you actually have to do the hard work of thinking before writing. Not allowing the Internet to be on at that time left me with nothing to do except think and write.

If my extraversion scale gets any lower, I'm going to go live in a cave. INTP

Email ThisBlogThis!Share to TwitterShare to FacebookShare to Pinterest
Labels: meme

About the end of July, I find myself avoiding looking at the sales parts of newspapers and also e-mail from the department.

Because they do not grasp that it is still summer. The ads want to tout Back to School items, and the chair wants to get everyone on board with the retreat/department meeting/training session that's been cooked up for us while we were thinking that it was still, well, July. It's as though you're having a good time at a party and someone reminds you that you have to do your income taxes when you get home. You can still be at the party, but it's not the same.

It's bad enough that every department I've ever been affiliated with has scheduled something for the day or days just before classes begin. Don't they know that if days could be bought and sold like Monopoly real estate, they're taking Boardwalk and Park Place away from us? Right when every minute counts--so that you can fight with the bookstore about why your books aren't in, or change your syllabus for the fiftieth time--you get sucked away into meetings whose importance may rank as a 10 on the department's significance meter but as a 0 on your own.

I did go to campus this week, and everything was as it should be: deserted, quiet, and dark except for a handful of intrepid graduate students. But what the e-mail and the ads tell me is that all too soon I'll have to ditch the shorts and t-shirt, and the writing and solitude, in favor of professional clothes and endless discussions of departmental business.

Would someone please tell these people that August is still considered a summer month?
Posted by undine at 5:13 PM 2 comments:

I think that it's called the "slow food movement" because it's opposed to fast food and wants to promote family dining and local merchandise.

However, I suspect that it's called the slow food movement because every item you put in your shopping basket becomes an exercise in moral dithering: Raised nearby conventional produce or two-states-away organic produce? I know "conventional close by" produce should win, but what if it's something like carrots or potatoes, where you can really taste a difference? Also, what about the people who don't have the luxury of paying extra for the local/organic save-the-planet option?

Fortunately, the area around Northern Clime has a lot of organic farms, some going back generations and some (to judge the age of the proprietors) dating back the early 1970s when people moved here and decided not to (or forgot to) leave. It also has farms with a lot of beans and wheat. At the farmer's market on Saturday, I could purchase the following--all organic, all local--without any dithering at all: several varieties of goat cheese (served at local restaurants for much fancier prices), tomatoes, round green squash, tomatoes, corn, crookneck squash, basil, English peas, small potatoes (purple, red, gold), raspberries, cherries, and, yes, beef for other members of the family. And the best part is that all the vendors had those WIC/Senior Citizens signs to accept food stamps or whatever.

And one more stop on the slow food tour: picking up a metal (ceramic inside) Sigg water bottle so that I can carry water from the Brita pitcher at home instead of buying plastic bottles of the stuff.

These are small steps, but at least they're something.
Posted by undine at 8:11 PM 3 comments:

"Al Gore III, 24, was arrested early in the morning on July 4 when Orange County Sheriff's deputies pulled him over for allegedly driving 100 mph in his 2006 Toyota Prius."

Of the many thoughts that should have gone through my mind (too bad about the speeding, it's good he wasn't killed, etc.) my real first thought was this:

"Yes! Now the world will know that the Prius is capable of kickass speed. It is NOT just a golf cart with better headlights."

Somewhere, someone in Toyotaworld must have had the same reaction.
Posted by undine at 2:57 PM No comments:

Email ThisBlogThis!Share to TwitterShare to FacebookShare to Pinterest
Labels: car

Email ThisBlogThis!Share to TwitterShare to FacebookShare to Pinterest
Labels: productivity

I decided to put into practice some of those tips from lifehacker.com and elsewhere about productivity. The chief one I thought I'd try is this:

Here are the rules I set: NO Internet access until after 5 p.m., including checking bank balances, checking e-mail, reading blogs, reading newspapers, or tracking down the name of that incredibly obscure actor on IMDB. No looking up phone numbers or using the OED online. If I wanted to check on something, I could write it down and check on it after 5.

Somehow, my days had become all about avoiding work: reading blogs, checking e-mail, looking up stuff online. I felt as though I had the attention span of a gnat, and as soon as I started working on a tough sentence, I had the impulse to go online and do something else.

So far, it's working. I feel a lot calmer, somehow, and I'm getting a lot more reading done. The impulses to go online just for a minute to check something are diminishing. The writing is still coming along slowly, but it's better than before.

Oh, and the great secret about e-mail in the summer is that no one is contacting me with grants, million dollar book contracts, or vital information on anything else--at least nothing that won't wait until after 5.
Posted by undine at 7:32 PM 6 comments:

Not posting because I'm trying to get a piece of writing done that apparently doesn't want to get written. It's an unruly, willful thing and is forcing me to sit at the desk for long hours. This feels like a staring contest between my computer screen and me, and guess who's winning?

I'll post more once the balance of power shifts.
Posted by undine at 9:59 PM No comments: 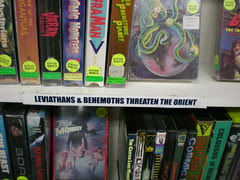 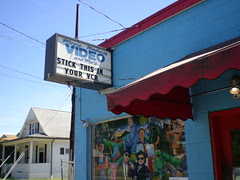 DSCN0089
Originally uploaded by undines
Inside? Every movie you could possibly want to see (if it's available on VHS), plus movie costumes and memorabilia.
Posted by undine at 8:55 AM No comments: 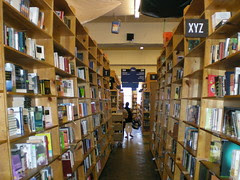 DSCN0074
Originally uploaded by undines
Powell's.
Posted by undine at 8:54 AM 4 comments: 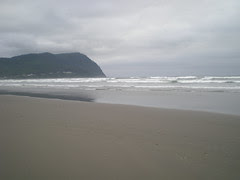 DSCN0066
Originally uploaded by undines
Posted by undine at 8:53 AM 2 comments: 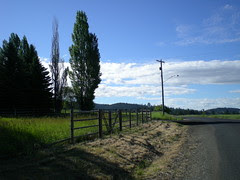 Morning walk
Originally uploaded by undines
I have become addicted to my morning walk. The route isn't that special or remote, though I hope to branch out, and it's only about 4 miles total, but it's the first exercise I have actually looked forward to for a long time. When I go to sleep at night, I'm actually excited about getting up early to walk; I don't even have to set the alarm. (Having a cat who thinks that only slackers sleep past 5 a.m. helps, of course.) Hearing and seeing the pheasants (squawk-AWK!) and quail is a nice side benefit, too.

I hope to progress to running and thus to get in shape for some bike rides on the hills around here. They don't look like much, until you're on them.

Just wanted to share something that is so much fun.
Posted by undine at 11:38 AM 4 comments:

(Sorry--the picture was just too ugly!)

Talked to another human being lately? I'm serious. You value knowledge above ALL else. You love new ideas, and become very excited over abstractions and theories. The fact that nobody else cares still hasn't become apparent to you...

Nerd's a great word to describe you, and I seriously couldn't care less about the different definitions of the word and why you're actually more of a geek than a nerd. Don't pretend you weren't thinking that. You want every single miniscule fact and theory to be presented correctly.

Critical? Sarcastic? Cynical? Pessimistic? Just a few words to describe you when you're at your very best...*cough* Sorry, I mean worst. Picking up the dudes or dudettes isn't something you find easy, but don't worry too much about it. You can blame it on your personality type now.

On top of all this, you're shy. Nice one, wench. No wonder you're on OKCupid!
Now, quickly go and delete everything about "theoretical questions" from your profile page. As long as nobody tries to start a conversation with you, just MAYBE you'll now have a chance of picking up a date. But don't get your hopes up.

I am interested though. If a tree fell over in a forest, would it really make a sound?

If you want to learn more about your personality type in a slightly less negative way, check out this.

The other personality types are as follows...