Mad Men thoughts on the approaching finale of Season 7 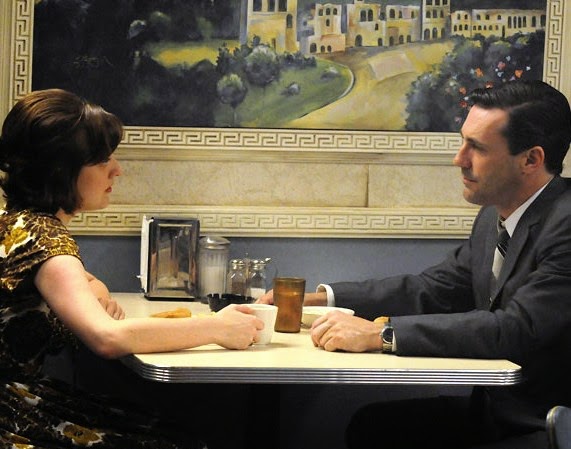 It's known as a mind vacation.  You need it at the point of the semester when you know that, whatever task you work on, someone is going to be disappointed or angry, because you can't get everything done on time.

But in a mind vacation, I can rewatch Mad Men for an hour or two while folding laundry or when I'm too tired to work or need to shut my mind down in order to get to sleep. The press of all the things I'm not doing/haven't done are completely at bay for that time.  Reading isn't a mind vacation any more, because I'm hammered by thoughts that I should be reading for work.

I began with Season 2 and am up to the beginning of Season 5. I'm looking forward with some anticipation and a little dread to the upcoming half season finale of Mad Men. Some random thoughts:


Actually, a lot of Season 6 might get skipped.  The more I think about it and its Misery Theater, the more irritated I get at the wasted opportunity. See Don relive Season 4! See him drink and wallow in misery! See him engage in yet another affair, this one even more formulaic than the rest: 1. Sylvia expresses guilt at their affair.  2. They have sex.  3. Sylvia expresses more guilt and drops a few Pearls of Wisdom. Every. Single. Time.  The Bob Benson plot is fun, as is some of the agency stuff, but the Sylvia plot is irritating.

For a year or so, I've occasionally looked at the mostly empty box of business cards that I got when I came to Northern Clime.  Order new ones with "Associate Professor" on them? Or wait and see what happens?

Yes, dear readers, I now need new business cards because I can take the "Associate" title off and just write "Professor."

Thanks to all of you for hanging in there and reading, especially during the Great Obsessive MOOC streak.  This space and your blogs help so much--thanks!
Posted by undine at 9:08 AM 23 comments: