My mother called recently with the news that an elderly (and not close) relative had died at the age of 94. I knew her in a weddings-funerals-and-Easter-gatherings kind of way and had not seen her in some years.

Still in her teens, Great-aunt X had married in the depths of the Depression and had gone to live on her new husband's family farm, where the household included a fairly, um, exacting mother-in-law, assorted relatives, and eventually six children of her own. I can't even begin to imagine the amount of work that she had to do every day to keep everyone, including a bedridden mother-in-law, fed, clothed, and clean, let alone to do the work that women did on farms back then.

She lived on the farm, by herself but with family nearby, until going into the hospital about a week before her death. She was living there last summer and, at 93, was still canning peaches, tomatoes, and sweet pickles as she had done for the last seventy years.

She was the most cheerful person I have ever met.

Although I don't usually talk about my family, I mention her here because for years when I've wanted to whine about how much work I have to do and how demanding people are and--well, you know how those whines go--I would think of Great-aunt X and the work she did. What it reminded me was that there's the work I do, and then there's work.
Posted by undine at 6:28 PM No comments:

Email ThisBlogThis!Share to TwitterShare to FacebookShare to Pinterest
Labels: travel

I haven't dropped off the face of the earth; I've just been in conference world, a rewarding place in many ways but also a busy and tiring one. They could have held it in my back yard for all that I've seen so far of the Fabulous City where it's being held.
Posted by undine at 6:02 PM No comments:

If you were a student, and you knew you had signed up for an online course, and you knew that it was being held in Blackboard, and you knew how to sign in to Blackboard and had even posted comments on the discussion board, what would you say if you saw the following?

What is to be done?

Two recent stories, one at The Atlantic and the other at Inside Higher Ed, raise an uncomfortable issue: what happens when the official policies of a college or university rub up against an instructor's standards?

The story at Inside Higher Ed is of the professor at Norfolk State who was denied tenure for failing too many of his students. Now, there may be issues here that aren't covered in the article--issues about expectations, for example--but this part is especially pertinent: Although school policy is that students must attend 80% of class sessions, many do not and receive passing grades anyway, since "there is a clear expectation from administrators — in particular from Dean Sandra J. DeLoatch, the dean whose recommendation turned the tide against Aird’s tenure bid — that 70 percent of students should pass."

The Atlantic story, "In the Basement of the Ivory Tower," is Professor X's meditation on the spot--between his shoulder blades, to be exact--where the good ideal that everyone deserves a college education meets his underprepared student, Ms. L:

By passing Ms. L., I would be eroding the standards of the school for which I worked. Besides, I nurse a healthy ration of paranoia. What if she were a plant from The New York Times doing a story on the declining standards of the nation’s colleges? In my mind’s eye, the front page of a newspaper spun madly, as in old movies, coming to rest to reveal a damning headline:

No, I would adhere to academic standards, and keep myself off the front page.

I'm troubled by both of these articles, so let's apply a little Lenin to the subject: what is to be done?
Posted by undine at 8:24 PM 9 comments:

"Watch the shoes," my colleague whispered as we settled ourselves into our seats, no small process where robes, hats, and hoods have to be adjusted lest they fall off at comical angles. She was right.

At graduation, the students are, for the first time in four years, all dressed alike. In fact, they are dressed like us: we all move somewhat stiffly under the unfamiliar dignity of robes at first, marching self-consciously to "Pomp and Circumstance." It's easier for faculty to relax, because they've been to a lot of college graduations and the students haven't. Then the students stop worrying that their caps will fall off and start to relax, too.

So, at the risk of sounding like a bad comparison and contrast essay, we are the same, yet different. They're wearing the regalia, varied only by the leis, stoles, and honor cords that signify their membership in various communities, and they're all there because they've achieved something important, as the smiles on their parents' faces attest.

Yet (comparison and contrast transition alert!) they are all different, too, and they--at least the women--want to express this through their shoes, the only part of the wardrobe that they have a choice about showing to people. I saw a lot of fashionably high heels with very pointed toes, and even though the wearers didn't always look terribly steady in them (these were very high heels; I have a pair and can only mince along in mine), these suggested women who weren't afraid that they'd fall on their faces in front of several thousand strangers when they got their diplomas. I also saw boots, sandals, sneakers, and some well-beloved shoes that were only a step up from flip-flops. I was later told that choosing shoes is a big deal, since they know that the shoes are the only thing people can see.

Yes, I listened to the speakers, heard all the songs, and was duly proud of the students I knew. Maybe it's just sentimentality (and I freely admit to being moved by ceremonies, even as I try to avoid them), but somehow I liked the idea that they were making this effort to be part of something that cost them time and money, that celebrated what they'd done, and that on the face of it emphasized how they were the same but that they'd adapted to show, even if just by their shoes, that they're all different.
Posted by undine at 5:03 PM No comments:

These are probably not news to everyone, but they are to me, so I thought I'd mention them here.

The grades have been turned in.
An old movie and a nap.
Summer school begins.
Posted by undine at 8:38 PM No comments:

Here's a hint to faculty members of all generations: do not use this phrase. No good will come of it.

Example, overheard in the hall, from shiny new faculty member to a senior (in rank) one: "I don't know if someone of your generation would know this," thereby placing the senior faculty member in age as being somewhere between John McCain and Methuselah.

How is the listener supposed to respond?

What's wrong with this picture? 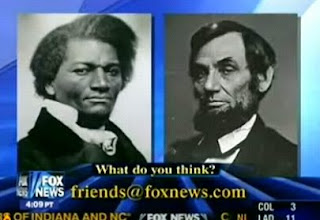 As seen at The Edge of the American West, Fox reports on a possible "Lincoln-Douglas" debate.

They have entirely the wrong Douglas(s) and haven't even spelled Frederick Douglass's name correctly. Other than that, it's a swell graphic.

Don't history classes in grade schools teach about the debates between the Little Giant (Stephen A. Douglas, left, from the Library of Congress) and Lincoln any more? Surely they teach about this in college courses, don't they?

Or is history one of those frivolous liberal arts that are somehow dragging down the curriculum at places like the University of Toledo?
Posted by undine at 6:00 PM 2 comments: