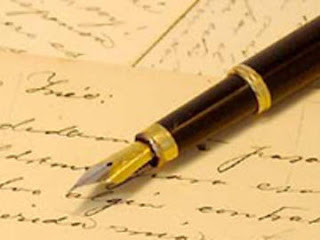 For the first time since my dream about the Mad Men writing group and Dame Eleanor's group a few years back, I am in a writing group.  Hooray!

It's really an accountability group of the kind that Boice and Silvia have separately recommended. We're not reading drafts, but we set goals and hold each other accountable for meeting them. "No excuses" is Silvia's motto, and it's ours, too.

I'm starting to think that the process of thinking about writing--the act of analyzing what you do when you write--is a recursive process, much as the act of writing itself is. When I read old "writing inspiration" posts here at this blog and elsewhere, it helps me to think about the process, which in turn helps me to think about the writing I'm trying to do.

The writing group is already helping with this, in these ways:

1. You work harder when you know you have to look into the eyes of a group and say, "No, I didn't meet that goal this week."

2.  They can cheer you on when you get things done.

3.  They can also fix you with a mildly stern gaze and point out that taking on too many low-hanging fruit-type writing assignments can leave your main project behind.

4. Since these are people in approximately my general field, I can ask for and give suggestions about publication venues.

5. Seeing how much everyone is accomplishing when not on sabbatical is a bracing reminder that I ought to be accomplishing more and to set goals accordingly.

This is the sixth year I've kept the Excel spreadsheet to keep track of writing, and there's a separate page where projects and deadlines are listed. It really does help. But I can choose not to open the spreadsheet, whereas the writing group is going to expect to hear from me.
Posted by undine at 10:21 AM 10 comments:

Some of you may remember, in 2013, that Mark Sample, a ProfHacker writer, thought it would be amusing to pull an internet prank in which he pretended to be in danger and disappear, leaving people to worry about him.

I wrote about that in a post called "Cry Wolf," and in linking to it and rereading it yesterday, my anger at that stupid stunt came back in full force, and I added to that post and to yesterday's.

In comments on the original "Cry Wolf" post, Stacey Donahue, who had convinced me to leave it up, mentioned the #OccupyMLA hoax, so I looked that one up and added this:


Edited to add: here's a link to the #OccupyMLA hoax, otherwise known as more pranksters wasting the time and patience of everyone on a serious issue so that tweets about genuine injustices will be ignored next time when people believe it's a hoax: http://www.chronicle.com/blogs/profhacker/occupying-mla/45357

All three of these hoaxers dressed it up in theory-speak and tried to spackle it  over with pretensions to doing something useful, but this is the same juvenile mindset that makes 11-year-old boys put firecrackers in mailboxes every 4th of July.  I don't see why we should either excuse it or trust the perpetrators.


Forgot to add this: if you want to play pranks with the the sensibilities of people who follow you, be prepared to be unfollowed and to never have anything you say taken seriously again, even though The Chronicle (a more forgiving medium) publishes your stuff. This is one scholar's body of work I never have to read. What credibility would that scholarship have? How would I know he's not making it up, too, a la the Sokal Social Text hoax?

Here's my question: why does this make us--okay, me--so angry? I wasn't involved, it was years ago, and there was no personal harm intended.

I think "erosion of public trust" is the key.

We've all seen that Goebbels quotation by now: "“If you tell a lie big enough and keep repeating it, people will eventually come to believe it. The lie can be maintained only for such time as the State can shield the people from the political, economic and or military consequences of the lie."

We've also seen how the "straight from the horse's mouth" medium of Twitter lends credibility to the most outrageous lies and how charges of "fake news" have become the "lie big enough."

We know that if a certain tweeter-in-chief told his followers that the earth was flat and paved with unicorn tongues, they'd believe it, because he's told them that all voices but his are fake. The technique isn't new. All cult leaders do this. Charles Manson did the same thing.

That's the harm, right there, and that's the cause of the anger.  Mark Twain once said that if a cat sat down on a hot stove once, she would never do it again--but she would never sit on a cold stove, either.

Or, as the old saying goes, once burned, twice shy.

So whether you're posting fake twitter b.s. as a postmodern exercise in meta-tweeting blah blah blah with supreme contempt for the poor fools who are taken in, or whether you're doing it to control a legion of followers, you're still doing the same thing.

You're manipulating people's minds and eroding their trust in a system of information that promotes the common good. You're teaching them to trust nothing, and, in the process, to rely on their gut instincts about what's true--Stephen Colbert's famous "truthiness"--and we have visible daily evidence of how well that's working out.

Thank you, sincerely, for all the useful things you all post on Twitter. I mean it. I learn a lot every day about resources that are available. I "like" a lot of things and repost many.

Thanks especially when you choose the most cogent or telling sentence out of the piece before posting a link. It really helps.

But when you say, without explanation, "this is a must-read," it makes me want to set fire to it.

Too many acronyms and abbreviations make my head hurt. There are hundreds of intelligent, literate people on Twitter whom I follow who don't use them, and if you clutter up your message that way, I'm going to skip your message and go on.

A Twitter essay, strung out in 15+ posts of 140 characters each, clogs up my Twitter feed and is annoying to read. Go write a blog post or publish on medium.com or lithub like everybody else.

If you set up bots to repeat the same message several times over a 24-hour period, it whispers "spam" to me and everyone who follows you. If you do it for more than a 24-hour period, that whisper turns to a shout.

If you (or your bots, and you know who you are), post just a link to Facebook on your Twitter feed, I'm not going there. Why?


Somewhere, if you're tweeting about a conference or event, someone involved ought to give its full name so we mere mortals can tell what you're talking about. Sometimes even clicking on the hashtag doesn't shed any light on the subject.

Forgot to add this: if you want to play pranks with the the sensibilities of people who follow you, be prepared to be unfollowed and to never have anything you say taken seriously again, even though The Chronicle (a more forgiving medium) publishes your stuff. This is one scholar's body of work I never have to read. What credibility would that scholarship have? How would I know he's not making it up, too, a la the Sokal Social Text hoax?

The winter of our discontent

As the long winter of our discontent drags on, I struggle to find something to say here that isn't simply repeating the several million messages of escalating daily outrage in Twitter or that doesn't sound entirely frivolous--like posts about writing.

To do the former is to pile more doom and gloom, and you already have enough of that on Twitter to sink your own feelings ever deeper. People are recommending books that are ever more dystopian both ecologically and politically, as if they figure you can't get enough of "I told you so" misery.

To do the latter is to suggest that you're gleefully dancing on the grave of American democracy, as in people hissing, "Don't you even care?"

Both positions can leave you feeling powerless, despite the actions you've taken (calling legislators, etc.)

But maybe also give a little time and space to some things that help mentally.

One, for me, is contemplating pictures from the past of my region --not to go back there politically (because nostalgia = racism, sexism, and all that, I do get it, I really do) but just . . .  to look and imagine being there, in that time and space, to see if it can be recaptured for --

Two, some writing that's not academic but might be fiction or creative nonfiction, never to be published (since it's neither sci-fi nor dystopian nor memoir) but just to turn the brain over to a different place for a while.

And then I'll write more about writing if everyone promises not to hiss at me in the comments.
Posted by undine at 10:56 AM 10 comments: