Florida CC asks faculty to bid for jobs: the English Department of the Future is here

Way back in 2008, in "English Department of the Future," I wrote this:

GA: "Hmm. That's not good. Those 5 deserve better for their tuition money; we have to keep the customers happy, you know. It's a good thing we don't have to rehire him in the spring. Do we still have the instructor bids from the fall?"


Minion: "Yes. Of the 350 applications we got, at least five or six of them offered to teach the class for very close to what Instructor X is teaching it for, although none of them offered to pay for all their own photocopying, as he did. I think we can get someone for around $2,000 to teach this course.


I was kidding. It was supposed to be satire.

According to IHE, a Florida community college trustee thinks it's a great idea:

Putting a project out to bid is typically part of the public works process, since competitive bids tend to drive down the price and ensure fair opportunity for contracts. But should that process be applied to faculty hiring in public higher education? A member of the Board of Trustees for the State College of Florida at Manatee-Sarasota thinks so, and he’s set to brief the board on his proposal at an upcoming meeting.

That was in September. Between then and now, Beruff was reportedly working on a second proposal that would ask potential college employees, including faculty members, to quote their fee for services on job applications. That information would then be used in the hiring decision.


I think I need a sign that reads "Professor Undine and her crystal ball predicting the future of higher education are available for a consulting fee.  The consulting fee is commensurate with what the top administration pays external consultants who give the same advice that faculty give them for free."

You're in the (almost) home stretch. Be good to yourself.

For reasons I don't at all understand, this has been an incredibly stressful semester. My colleagues are lovely, as always, so it may be just the feeling, possibly exaggerated, of being pulled in too many directions and failing at all of them (which is on me, not the work or the surroundings).

The copy-edited book is back at the press, and I've finished a couple of small writing projects. Yet the stress of not getting other things finished--the recalcitrant article manuscript, conference papers, etc.-- is causing anxiety and things like the flashing lights and obscured vision that are signs of a very bad headache. It doesn't progress if I can stretch out with my office door closed for half an hour.  I don't want to call it a migraine, but still: flashing lights.

So here's a list to pry me (us) off the ceiling at this point of the semester.

1. You're in the (almost) home stretch. Be good to yourself.

2. Try a cup of green tea.  Try a tall glass of water, which also combats fatigue.

3. Even better, try to get out for a run. Listen to a podcast or a book rather than the voices inside your head.

4. Your colleagues may forgive you for not showing up at the many events scheduled every week. (Maybe they are like Fie, who has some wise words about this in the comments to an earlier post.)

5. About #4: unless you stride around in a swirling cloak like Orson Welles, chances are good no one will even notice your absence, so stop worrying.

6. Eat good, simple food and make it a meal.  A handful of crackers or almonds wolfed down before someone's presentation is not the same as lunch or dinner.

7. Looking at a list of five pieces of writing, all equally important, all requiring lots of time and complex thought, is a good way to paralyze yourself into thinking "I should do X -- wait, Y is due sooner --no, here's another email about Z."

Pick one. If you find yourself sitting in front of a screen and unable to write, grade some papers, even if it does burn the sacred morning writing time.  At least you'll be doing something, and you'll feel better for it.

8. Remember the big picture.  We're not doing brain surgery here. With the exception of recommendation letters, which have to be in on time, and grant letters (ditto), you can only get done what you can get done, as quickly and as well as you can manage it.

10. Get some fresh air, even if it's just for five minutes.  Breathe deeply.  The air is a wonderful tonic, which I'm making up but sounds like something Emerson should have said.

What's your advice for de-stressing?

I should probably have called this "Ten weird tricks about lecturing" or "Lecturing: what you learn will shock you!" to grab more page views.

But it probably won't shock you.  Twitter has lost its mind over the "Lecture Me. Really" essay in the New York Times yesterday. The essay suggested that sometimes a good lecture helps listeners to bring together information in a compelling way and that taking notes might students help to assimilate information. You know, learn something.

Twitter responded with roughly this sentiment: "Lectures are evil. Did we not drive a stake through the heart of this awful practice? Everyone knows that constant interaction on Twitter is the One Best Way to teach. Students alone know how best to learn, and they know what they need to learn, too. Why are you trying to impose your terrible methods on them all the time?"

Herewith are ten thoughts about lecturing, in no particular order.

2. When I began teaching, having duly learned how evil lectures were, I did not do it. Ever. Students began to ask for lectures. They wanted some information explained, so I learned to give lectures and to make them good.

3. Lecturing is storytelling.  It ought to have a point, and an organization, and interesting information bits along with the things that they have to know, which might or might not be interesting to them.

4. Pictures help. Interaction helps.  PowerPoint is really for pictures rather than bullet points.   Ask questions. Ask them to respond to what they're seeing.

5. If you think of lecturing as if you're telling a story, you'll keep it short. Henry Ward Beecher and Jonathan Edwards are dead. No one can hold an audience spellbound for 3 hours or usually even an hour any more.  If you keep it to 20 minutes, or even less, it'll work better.

6. Brief lecture + an activity immediately after that to capitalize on what students have learned = a winning combination. Not every day, but some days.  You have to mix things up in the classroom. See point 1.

7. Keep lecturing for some of the "big picture" stuff. I had some instructors who could come into a classroom, open a book, and keep us more or less spellbound (with not much interaction) by analyzing poems for three hours. That's not a sustainable model for most of us.  Lecture entertainingly on the big ideas, and then follow it up with a group project or an analytical exercise about a specific poem or piece of prose.

8. Sometimes when you're discussing a poem, you'll hear students say something as though they just thought of it, even though you said it earlier.  This is a good thing. It means that they're internalizing the ideas and taking ownership of them.

9. When students work in groups, they may not get all the meaning that you'd like them to get out of a piece, the kind that you would have said if you had lectured about it. This is okay.  They will remember it better if they engage with it themselves.

10. Bottom line: three methods.
--Say you give 100% of some necessary information in a lecture.  Students may remember as little as 60% of it, depending on the student.
--If students discuss the work in groups, they may only get 60% of what you think they should learn, but they will remember it.
--When students present their work to the class, they may only say about half of that, or 30%. But they will have a better handle on that 30% because they've worked with it or listened to it from their peers.  That's why it's important to use more than one method.

Updated to add: Miriam Burstein has some good thoughts on this.
Posted by undine at 3:58 PM 5 comments:

Our campus is exploding with events right now. Everyone is hosting a talk, or giving a talk, or organizing something for students.  Club meetings. Presentations. I've taken time to prepare for and have presented at some of these and have attended some others.

Right now, there's something every day of the week, including days that I usually do research.

On one hand, it's wonderful to see so much interest and activity.

On the other hand, if you start getting a migraine because you're running from one to the other, maybe it's time to stop.

But what do you do about "audience guilt," the feeling that you ought to be going to show support for colleagues and students?

Sometimes I've emailed the person to say "sorry, but I can't be there" when I have had an appointment.

Does that really help, though, or does it ring false, as in "you should have been there, anyway"?

Last week I was supposed to go to something but was so slammed with immediate work (as in meeting my classes in an hour) that I couldn't.  I got the work done, but the residual guilt got worse.

How do you balance these things? 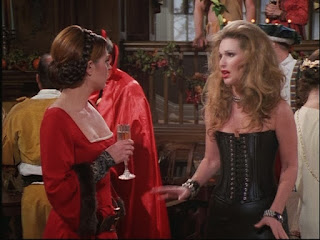