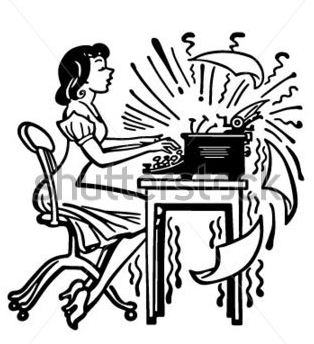 Ms. Mentor calls October "exploding head month" because of all the grant applications due then.  A whole lot of local ones are due next week. How can I deal with applications that want to know how much money I need to spend on June 10, 2015 when I can barely get through the stuff I need to do for next Tuesday?

Dear Future,
Here are some possibilities:
1. Start last year.
2. Start tomorrow for next year.
3. Seriously, practice a little time management.
4. Comfort yourself in the knowledge that with grant support so tight (NEH funds 6% of its individual scholar grants) you are likely only to be bragging fodder for its glossy brochures anyway: "We got 10 zillion applications and only funded 5! Look how selective we are! Yay for us!"

Clay Shirky, a famous person on the Internet, has pronounced laptops a distraction in the classroom and restricted their use, something I figured out and did a long time ago.  Now the fanboys who have called me a Luddite and blamed me for not liking the Shiny Things are falling all over themselves pronouncing the Wisdom of Clay.  Why is this so?

Because you are not famous on the Internet, and because, I fear, you are not a guy and hence to fanboys do not have the mental equipment to think intelligently about Shiny Things. Think of yourself as the secret Queen of the Internet who predicts all things but whose power would be diminished if anyone listened to you.  In other words, get over it.

Out of idle curiosity, I looked at the MLA Job List and discovered that there are only 5 jobs in the country, 3 in something resembling my specialty, at the associate or full level!

This is a job market?

Unless you have spent the last 30 years in silent meditation and prayer, surely this cannot be a surprise to you.  Ms. Mentor had a column about this recently, which if the CHE had a search feature instead of a Ouija Board, I would seek out and link to.  Surely you can find better things to do with your idle curiosity, like putting your books in some kind of order, or writing something, or taking a walk around the block, or, better still, helping your students and junior colleagues to get prepared for their job applications.
Posted by undine at 2:55 PM No comments:

Was there ever a time of idealism in college?

Dean Dad has an interesting post about artists and the advice being given to them: