The correct way to Woman

The brilliant Rebecca Solnit, author of Men Explain Things to Me, called it "mansplaining," but there's more to it than that.

We all know what mansplaining is, and it includes things like asking "Can you tell me how to get some apples?" and having a chorus reply, "Oh, no no no, you're doing it all wrong; what you want for your pie is rhubarb" as if you don't know what you want the apples for and need instruction.

So it's not mansplaining, exactly. More and more these days, on listservs and in smaller emails, we're (or I am) being instructed on the correct way to Woman.

Is it since Trump or since Kavanaugh? Hard to tell. But it goes something like this:

"I, a white male, recognize your oppression and in solidarity, and to show my virtue, you must do X, Y, and Z and feel A, B, and C. You must operate in solidarity with other women, according to the rules I've set, and if you don't, you are complicit in the problem as I have defined it and are too stupid to recognize your own oppression, as I have explained at great length on this listserv. Kthxbai."

I can't imagine how infuriating this must be for men and women of color; it's plenty infuriating for me. I have been Womaning for some time now and think I've got it covered, thanks.

As it happens, I am in solidarity in fighting against problems and I do what I can do. But like most adult human beings, I resist being bossed around--resist it vigorously, in fact.

And men aren't the only ones who want to tell women how to Woman.

I was thinking about this when looking again at the Salinger biography this morning (because it's not work).

Even without holding any particular brief for Maynard as a writer, you can see that what she's recounting in the early sections is the story of abuse, with herself as the object of it. Predictably, David Shields, Jonathan Yardley, etc., had no use for the story and Maynard's outing of The Great Man.

But neither did Cynthia Ozick, Larissa MacFarquhar, Elizabeth Gleick, Juliet Waters, and, famously, Maureen Dowd, and Caitlin Flanagan, who all had scathing and by-now-all-too-familiar things to say about a woman who speaks out about her abuse: She did it wrong and had no right to tell her story. Only Michiko Kakutani, Liza Schwarzbaum, Joyce Carol Oates, and Katha Pollitt were able to set apart the writing, which they weren't crazy about, from the person, whose experiences they understood as damaging.

Salerno's book came out in 2013, and many of the reviews were from 1998, after Maynard's memoir was published, both of which seem a lifetime ago. The reactions have shifted 180 degrees, so that's progress.

I guess there's no point that ties these two ideas together, except that one (Salinger) sparked me to think of the other one (how to Woman). I think, though, that especially when a majority party and its leader is telling delighted followers what the One Best Way is, we ought to think twice before taking the advice of anyone on the other side who's telling us what their idea of the One Best Way to Woman might be. Your ideology does not oblige me to behave in the ways you dictate to me, even if it's correct and not crazypants.

To those who do free stuff to make the world a better place: thank you. 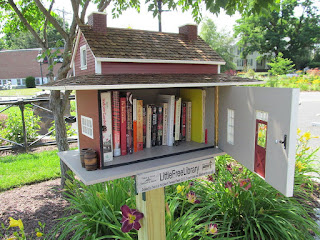 When I was out walking yesterday, I saw that our neighborhood's Little Free Library had a sign up that Todd H. Bol, founder of the Little Free Libraries movement, had died. (See the obit at BoingBoing, the source of this picture.)

I don't have a Little Free Library because giving away books of literary criticism from rhymes-with-Luke-Luniversity-Fress isn't going to win many neighborhood hearts and minds, but still: farewell, R.I.P., and thank you, Todd H. Bol. You wanted to make the world a better place, and you did.

You might remember that last year the Radical Librarians were criticizing Little Free Libraries because they were just not quite correct enough and that they should cease to exist so that those who put them up could go advocate for more library funding--because obviously people who love books couldn't possibly do both. Obviously.


It's not an either/or with this or with other schemes for betterment.

Also, we ought to thank the people who make things for free.

For example, around the web (okay, on Twitter and comment boards) you'll see that someone has put up--for free--software on GitHub or a site that does something specific you need for research.

Let me emphasize: for free--not adware, not 30-day trials.

Most people say thanks, but a few are all "this sucks! Why doesn't it do X function that I need?"

Or "why doesn't this website have this thing I need for free?"

Or "why doesn't this transcription or site include all the metadata I need?"

Or--but you get the picture.

Now, big sites like Google Books have an obligation (says I) not to disable previously available functionality, like page numbers. Why have they done this for the preview function in many cases? No one knows. (Digression--sorry.)

Political action is important, and so is giving money. But so too is thanking the people who are trying to make the world a better place. It's not either/or.

Email ThisBlogThis!Share to TwitterShare to FacebookShare to Pinterest
Labels: off topic

A group of merry pranksters with a mean streak a mile wide and lots and lots of time on their hands perpetrated a hoax recently by submitting faked papers and getting a couple of them published.

So whose time did they waste?

They abuse the trusting nature of human beings. It's a bullying move. It shows you have power over someone and that you're displaying it in front of an audience to humiliate your victim.

So you get to be a bully and make someone look like a fool. You do you. Happy now?

It's only one step away from the kind of bullying power trip that we saw in the news last week with the Kavanaugh hearings, and I don't have to say any more about that.

Abuse someone's trust. Trick them into believing one thing when you mean to hurt them. Carry out your plan and then laugh at your victims.

If you want to read more, here's some views from The Chronicle.

One of the people there said "Any academic who thinks hoaxing as such is unethical or nugatory is a dull and petty functionary."

1. It IS unethical.
2. I'd rather be a dull and petty functionary than a jerk.

The parable of the pies: how the sausage gets made

If you're in an academic department, and especially if you've held any kind of administrative position, you might recognize the truth of Bismarck's (or, as Wikipedia tells me, John Godfrey Saxe's) well-known apothegm, as paraphrased in one of my favorite Hamilton lyrics:


No one really knows how the game is played
The art of the trade
How the sausage gets made
We just assume that it happens
But no one else is in
The room where it happens.

I'm not even close to the higher-up Northern Clime University "room where it happens," but at a lower level, I've had ample opportunities to see how the "art of the trade" happens in just about every set of decisions.

But even assuming that everyone is nobly concerned with the best interests of the students and the university, differences of opinion happen while that sausage is getting made.

Let's say that your department wants ten apple pies and that the pies are not to fix something that is going horribly wrong.  You fill out the multitude of forms, talk to individuals, see the lay of the land, and then approach Admin with the request.

Admin says, "You must be joking! No pies for you."

You say, "But here are the reasons we need the pies to take better care of our students."

You say, "And if you give us the pies, we can form a consortium, build partnerships, raise our standing among peer institutions, and be perceived as a local god."

You say, "And we'll write a grant to get the matching funds and hope it gets funded."

Admin says,  "Well, we can see our way clear to give you five pies, four apple and one mince."

Jubilant at this success, you take this to your colleagues for the first time.

One group--let's call them the incrementalists, or Hillary voters--says, "It's a start! Let's get going on that grant. Do you think we could negotiate for two more pies?"

Another group--let's call them the ideologically pure, or Jill Stein voters--says, "You sellouts! Everyone hates mince! Why did you agree to this? We need ten apple pies, full stop.  This is untenable and ideologically impure. Ten pies or we dissolve this department! Burn it down!"

It seems to me that there can be good, sincere colleagues on both sides, but most people are probably more one than the other.

Incrementalists have some faith in change within the system--not all systems everywhere, but the specific little corner of the system that they can influence. This is sometimes true.

Ideological purists have faith that if they throw a cog in the machine or blow it up, something better will result. This is also sometimes true.

As an incrementalist who works to make things better ("bends toward justice"), I see the five pies as a glass half full. Not everyone would agree.

But I have become an ideologue in one respect: I am completely, totally, and utterly done with the loud virtue-signalling and vilification that ensues from people who haven't lifted a finger after some of us have worked our tails off to get those five pies.