I was recently scrolling through Shedworking (https://www.shedworking.co.uk/), a UK* site for hopes and dreams about writing houses, when I saw this two-parter about the novelist, short-story writer, and critic George Saunders (Lincoln in the Bardo is his award-winning novel). 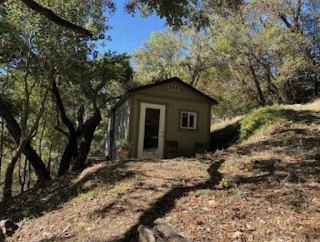 Here, from Shedworking, is a picture of his writing house in California.

(Insert pause here while you sigh with delight.)

And here, from the New York Times* via Shedworking, is a bit about his writing practice:

"Saunders writes in a shed across the driveway from his house, where we sat for a couple hours one morning while his two yellow labs nosed around outside the door. There’s the desk and a sofa and a table stacked with books that he has been researching for his next project."

And this from The Guardian:

"His first newsletter includes a photograph of his solitary writing shed in the woods behind the house in Corralitos. His wife, Paula, bought it for him a few years ago, and it’s a writer’s dream. No fences or distant rooftops. Just the shed surrounded by trees and the shadows of trees. Writers’ rooms are usually reclusive. But Saunders is using his to host a writing community. Why does he care? “I suppose one of the things that a person worries about along the way is, ‘Does this really matter?’”

And finally, from his new substack at https://georgesaunders.substack.com/p/welcome-to-story-club, which sounds very much worth the $6 a month:

"I’d come flying/stumbling down at the end of the day from a little writing shed I have up on the hillside in Corralitos, California, feeling, not that I’d “taken a break from” the current difficulties, but that I’d, well, girded up my loins for a deeper, less fearful engagement with the world."

I am tempted to join the Story Club substack, not only for the pleasure of learning about writing short stories from a contemporary master at the top of his game but also in hopes that we will see interiors of the writing house.

Digression 1:  The Brits take their garden sheds/writing houses very seriously and even have an award for them.

Digression 2: From the New York Times piece, I learned that Saunders has the same guilty pleasure that I do--reading Vanity Fair on a plane. Famous genius writers and obscure bloggers--they're so alike!

It's become a (semi? quasi?) annual tradition to post from MLA, and although I skipped last year, here's what it looks like in this Year of Our Covid 2022.

We'll go back to in-person conferences, surely, so this little golden age of virtual conference attendance won't last. But for now, I'll enjoy virtual MLA to the fullest and try to look downcast as everyone laments the loss of the in-person version.