Procrastination: not the thief of time but the generator of creativity

At the New York Times, Adam Grant suggests not being a "pre-crastinator" but a procrastinator. He used to write everything weeks or months in advance but was convinced by a study that procrastination can actually help your creativity.

The short version: if you know you have to do something but put it off for a bit (but don't wait until the last minute), the ideas that emerge are likely to be more creative.

And some epic procrastinators are in this boat with you:


Steve Jobs procrastinated constantly, several of his collaborators have told me. Bill Clinton has been described as a “chronic procrastinator” who waits until the last minute to revise his speeches. Frank Lloyd Wright spent almost a year procrastinating on a commission, to the point that his patron drove out and insisted that he produce a drawing on the spot. It became Fallingwater, his masterpiece. Aaron Sorkin, the screenwriter behind “Steve Jobs” and “The West Wing,” is known to put off writing until the last minute. When Katie Couric asked him about it, he replied, “You call it procrastination, I call it thinking.”

I'm hoping this works, since I've been taking care of a family member all week and haven't touched email or writing, despite deadlines. Time to face the music and dig in--but here's hoping that today, when I do, the ideas will be all the better for it.
Posted by undine at 10:04 AM 5 comments: 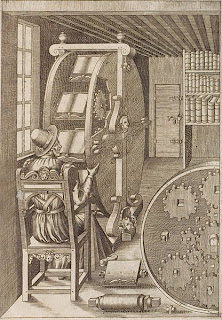 Here's some writing inspiration from prolific and popular authors, from what I've been reading during my lunch breaks. Lunch reading cannot be work reading, and that's when the library's electronic books are a godsend.
1. I've just finished Stephen King's On Writing, and it is as good as everyone has said it is. The only Stephen King novel I've ever read was The Shining, years ago in The Land of No Internets, but even if you're not a horror/suspense fan, the evocation of his early life and his writing life are really interesting.  A few specifics:
All this sounds really flat, but he says everything more entertainingly in the book.

2. Next up is John Scalzi, who wrote this today in what he probably wouldn't have tagged "writing inspiration"--but it sure is. Those of you who follow Scalzi know he's a prolific Twitterer, blogger, etc., as well as a novelist, so this marks a change for him:

How to deal with this? Well, I’ve made a new rule, which really isn’t a new rule, but kind of an update rule. And the rule is: before 2,000 words or noon, whichever comes first, no Internet at all. No blog, no Twitter, no Facebook, no email, no checking the news. When I sit down at the computer (usually around 8am), I disconnect it from the network. I leave the cell phone in the other room (and unless you’re my wife, daughter, editor or agent, if you call the landline, it’s not going to get picked up, either). No Internet. At all.

3. What to say about Joyce Carol Oates, whose productivity puts us all (except maybe Anthony Grafton) to shame? I've just started her memoir The Lost Landscape and will report back soon. Until then, here are some bullet points from a video I wrote about before in which she discusses writing:


--She can "basically write all day long."
--She writes every day, as soon as she can, even before 7 a.m.
--She looks out the window and her cat keeps her company.
--Revision is "exciting and relaxing."
--Writing is "thrilling."


And so, the problem, more or less, is identified:
1.  I cannot read books because my brain has been trained to want a constant hit of dopamine, which a digital interruption will provide.
2. This digital dopamine addiction means I have trouble focusing: on books, work, family and friends
Problem identified, or most of it. There is more.

And so, starting in January, I started making some changes. The key ones are:

Happy New Year, writing inspiration, and the boulder in the cellar


Planning a process for planning another process. Bickering over semantics in a committee meeting, or worse: group-writing policy statements (LIGHT ME ON FIRE NOW). All of these steal our time.

I didn't write as much last year because most of the year was taken up with smaller projects, a collaborative project, and the Laocoon manuscript, which meant lot of rewriting and revising but not as many new words.

As this blog's long-suffering readers know, the Laocoon manuscript took years of writing, editing, and fretting. It's now at the publisher (page proofs are coming next month), so it'll be out this year.

But having that boulder of a manuscript meant that I always knew what I was supposed to be doing next.  There's an episode of The Dick Van Dyke Show where Rob and Laura Petrie want to buy a house that seems perfect -- until they see the giant boulder that's in the cellar. It can't be moved and is a fixture in the house that they see every time they go into the cellar. It's an obstacle, true, but it's their obstacle, and they learn to structure their cellar around it. That's the Laocoon manuscript: the beloved obstacle that allowed me to focus on it and structure my writing space for the past few years.

But now, the Laocoon manuscript is gone, and this leaves me with the problem of the empty writing cellar. What do I do when I go to the writing space? Which project should I work on first? I have some promised essays to work on, some with deadlines that are quite soon, but I had those alongside the Laocoon manuscript, too. They don't take the place of the boulder, so to speak.

I'm starting by transcribing (to 750words & hence the research journal) a lot of the handwritten material that I wrote in the Moleskine notebook last year, omitting anything that went into the book revisions. It's the fancy kind that supposedly works with Evernote and is searchable if you take pictures of the pages, but I have never been able to make it recognize my handwriting.

I used to save the Moleskines for special notes and then realized I never wrote in them. Last year, I took to carrying the Moleskine everywhere and putting everything in it--schedules, conference notes, to-do lists, comments on books and movies, and daily records. Not all of it is going to be useful, but maybe it'll help as I look for the next boulder in the cellar.