Catching up on the week and some writing inspiration

I'm getting ready for something for which have to get the writing done--have to. I've been paralyzed with anxiety about writing. What worked the other day?

Sit down and time myself like Anthony Trollope. He used to write 250 words every 15 minutes for 3 hours a day, by the clock, before he went to work. Every day. Now, you can say what you want about the quality of Trollope's novels (most of them are pretty good), but you can never deny that they are done.

1. Three weeks ago I gave up FB and advice columns, cold turkey, and I don't miss them. FB was making me miserable because everyone was finishing book proposals, book chapters, etc. and I was not. Deciding there was no need to torment myself, I hung a "gone fishin'" sign on the site and haven't been back--ditto for the advice columns.

2. One of my colleagues who never attends any kind of department meeting and is minimally on campus saw me the other day and said, "Where have you been? I haven't seen you around." I said, "right there in the office and around," and I did not strangle her, so victory is mine.

Remember, this isn't the be-all and end-all that it used to be. As Jonathan Kramnick reminds us in "The Way We Hire Now" (https://www.chronicle.com/article/the-way-we-hire-now/244467):


To get a grip on where things now stand, start with the fact that the MLA jobs list has lost its monopoly. The low cost and simplicity of doing things online has meant that advertisements now appear on any number of platforms, including The Chronicle, Interfolio, Higher Education Recruitment Consortium (HERC), HigherEdJobs, and well beyond.

Don't forget the jobs at Insidehighered.com, too.

If you're looking for information on historical trends (and the now-infamous rosy vision of the Bowen report), here are some links. 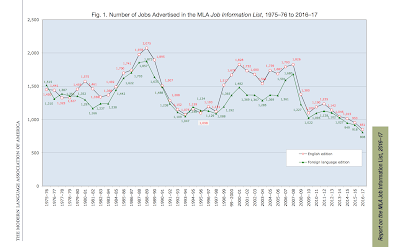 At the Chronicle (paywalled but free with this link): On the Bowen report and what went wrong: https://t.co/gw9G30Aacg

Some older posts from this blog about job letters, still maybe useful:

Good luck, everyone!
Posted by undine at 8:34 AM 2 comments:

Email ThisBlogThis!Share to TwitterShare to FacebookShare to Pinterest
Labels: jobs

Off-topic: NYTimes on Joyce Maynard: "Was she predator or prey?"

It's been fascinating to see the shift in opinion on Joyce Maynard and her memoir At Home in the World.

A few years back, when I was contemplating mid-century male novelists like Updike and Salinger, I had this to say about Maynard's book:


The whole Salinger thing that she was pilloried for is only a part of the book, and apparently, in another interwebs development I totally missed, everyone is in a pro- or anti-Maynard camp: either "How dare you malign The Great Man?" or "How dare The Great Man have acted so cruelly toward women?"  Maynard's take on the relationship, in the new preface, is not so much "what was I thinking to quit Yale and move to New Hampshire with Jerry Salinger?" as "how could he violate my innocence by overpowering me with his adoration? Shouldn't we think of 18-year-olds as girls instead of women?" It's a fair question, but really, who could have stopped her or any of us at 18? That's not a hornet's nest I'm willing to wade into in this space.   . . .

When she shows up at Salinger's door in 1997--which I think took a lot of courage, by the way--he tells her that she had the capacity to become something but has become nothing, or something like that. She's obviously made something of herself, having had a successful career,  and she is a survivor, but is there anything in what Salinger says? Or is this just another case of a powerful man falling in love with an image that he creates and trying to destroy the image when she turns out to have a voice of her own?

In case you didn't know, Maynard was pilloried by a lot of people for writing the memoir of her own life simply because Salinger was part of it, as though the Great Man's privacy could never be disturbed.

The attacks were really vitriolic. Chief among them was Jonathan Yardley in the Washington Post and Maureen Dowd, who took a day off from being Inspector Javert to Hillary Clinton's Jean Valjean to excoriate Maynard for being a "leech woman" (and got the point of that movie wrong, but anyway).

In a recent New York Times essay (which, by the way, is pretty much lifted from At Home in the World), Maynard links her experience to the #MeToo movement and wonders whether maybe a change is at hand:


Last fall, when word of Harvey Weinstein’s abuses of women in the entertainment industry overtook the press, followed by near daily revelations about other prominent and respected men accused of similar violations, I supposed this was the moment when my own experience might be seen in a new light. I thought my phone would ring.

The call never came. And though I believe that if the book I wrote 20 years ago were published today it would be received differently, it does not appear that enlightenment concerning the abuses of men in power extends retroactively to women who chose to speak long ago, and were shamed and humiliated for doing so. As recently as last fall — on the occasion of my having published a memoir about the death of my second husband, a book in which Salinger never appears — I was referred to as “the queen of oversharing.”

Oversharing. What does it say about us that a woman who speaks the truth of her experience should be dismissed for telling more than the world feels comfortable hearing? (And it is always a woman who will be accused of this; when a male writer confesses intimate details of his life, he’s brave, fearless, even brilliant. Consider, just for starters, Norman Mailer. Or, more recently, Karl Ove Knausgaard.)

Exactly right. Maynard has always mined her own life for material, but has she done so more than an Updike, a Mailer, a Roth, or, yes, a Salinger?

What's fascinating is that the comments in the comments section are squarely on Maynard's side. There's no one grousing about style (as Yardley did) or how dare she expose Salinger.  The tide has shifted, it seems, even if no one picked up the phone to call Maynard for an interview. Maybe there really is a sea change in attitudes.
Posted by undine at 8:53 PM 4 comments: