Happy New Year, everyone! I don't want to reflect on this year (too little done on the Laocoon manuscript, for one thing), but here are some posts to ease out the old year and bring in the new.

No MOOC rants or controversial subjects were harmed in the making of these links.  Nothing will raise your blood pressure.  Have a peaceful night!

What if?
Conference advice

Bardiac very reasonably asks whether the job situation is worse now than it used to be.
I don't have the answer, but the MLA does:
http://www.mla.org/pdf/report_jil_1112.pdf

This report has tables where numbers and percentages of jobs are broken down in most ways--by rank, by region, by month advertised, and so on.

Among the conclusions of that report are that things are (slightly) looking up from the 2008-9 low and that more jobs are being offered after the big October issue. 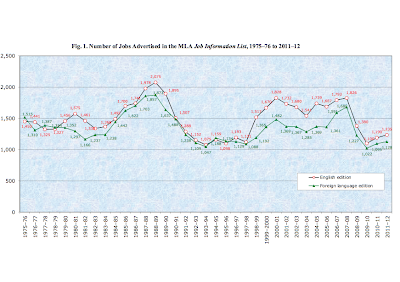 What about cohorts of previous Ph.D. graduates seeking jobs? Here's some older information from 2001-2002, from here: http://www.mla.org/professionalization
The Academic Job Search in English: A Statistical Representation for 2001-02

Also, here's a comment that I left over at Historiann's post about the job market, addressing the issue of why search committees don't contact people at every step of the process, which would be more humane:

The thing is, no one on search committees behaves maliciously, I don't think, and certainly not in the ways that have been charged.  We have a detailed and much-documented process to follow, and HR is right there at our shoulders, seeing to it that we follow it every step of the way. It's ultimately to ensure fairness.

Why don't search committees notify those who didn't make the short list? Let's say you have 350 applicants, a long short list of 40-50 for additional materials, and a maximum of 12-20 you can interview either at the convention or on Skype. What may seem humane--that is, notifying the 300--is, if seen through institutional eyes, 300 lawsuits waiting to happen, when even one would be too many. And what if there was a flaw in the selection metrics somewhere and all the files or some subset of them need to be re-reviewed after consultation with HR?

The reality is that the job isn't filled until an offer is made and accepted.

As Bardiac says, it may be that the search committee goes back to the longer short list or even the whole list, especially if it's a hard-to-fill specialty. In other words, it's not really over until it's over.

That said, we need to keep trying to improve the process and do everything we can to make it humane and responsive to candidates.

I hope Christmas and all holidays were and are peaceful, restful, and happy.
Posted by undine at 6:37 AM No comments:

Calm down, everybody: no one says you can't teach essay writing

Wow. Ignore the interwebs for a week or so and they blow up with a new issue.  Who'd have thought it?

Recently, Rebecca Schuman (you know, she of the declaration that tenured academics have "blood on their hands") wrote a piece for Slate  that said if students hate writing essays and teachers hate reading them, why don't we stop assigning them?  Readers were shocked, shocked! to hear this and inundated poor Professor Schuman with hate mail and her superiors with demands that she be fired.

Profhacker published an open letter defending the Slate piece as an issue of "academic freedom," which  may be a bit of a stretch, and condemning the uncivil tone of the attackers, which is a very real problem and no stretch at all.

First of all, internets: get a grip.

Come on. It's Slate, where all headlines end in a question mark and "We are clickbait. Snark is good." is on the masthead.  Slate lives to be provocative, not informative.  That's why it exists.  Why are you surprised that a provocative piece appears there?

Facts aren't important over at Slate, any more than they are on other entertainment sites (on one of which I read something about "Alexander Hamilton and his daughter Theodosia," never mind that the writer meant Aaron Burr, because hey, it was a long time ago and there was a duel and they're both dead, right?). So Professor Schuman judged the audience and wrote a snarky essay that would gain a lot of notoriety.  That is Slate success, so why pick on her for judging the audience correctly?

Second, so what if she stirs up the conversation by being provocative, at Slate, ChronicleVitae, and pankisseskafka, her blog? Does that mean the conversation isn't worth having?  The fact that talking about writing essays gets started by real (or satirically expressed) outrage doesn't make it invalid. And again: Slate. You notice that Slate didn't publish her carefully reasoned explanation of what she actually does, and why? No click bait here, so let's move along.

Third, the "no essay" idea isn't even new.  Cathy Davidson has been pioneering this approach for a long time, and so have a lot of other people. We can argue about ways of writing until the cows come home, and maybe learn something from the discussion, even if what we learn is the inspired lunacy of some approaches. No one's forcing you to adopt The One Best Way (yet). That's the time to begin the more reasoned conversation.

So let's take a break from the outrage and realize that this is what passes for literate entertainment and discourse on the interwebs--and that the best way not to get upset by it is not to engage it if it upsets you.

1. You know how people are always warned to make hard-to-crack passwords and end up using "password" or "12345678" or something easy anyway?  Would it make you feel better to know that the people behind the nuclear launch codes felt the same way?


Given how nervous many of us were during the Cold War, it’s just as well that we didn’t know the interesting fact recently reported in The Guardian and Gizmodo: for about twenty years, and in direct contravention of orders from presidents and defense secretaries, the U.S. military had the eight-digit nuclear launch codes for Minuteman missile silos set to 00000000.

Apparently they resented the eight-digit “fire only if ordered to do so by the president” security system imposed on them in 1962, as it made firing nuclear missiles slower and more difficult. They responded by permanently assigning the system a single launch code that was the moral equivalent of using “password” or “12345678” or “qwerty” as the overall password for your online account.

But it gets worse:


[I]n case you actually did forget the code, it was handily written down on a checklist handed out to the soldiers. As Dr. Bruce G. Blair, who was once a Minuteman launch officer, stated:


Our launch checklist in fact instructed us, the firing crew, to double-check the locking panel in our underground launch bunker to ensure that no digits other than zero had been inadvertently dialed into the panel.

This ensured that there was no need to wait for Presidential confirmation….


Many speakers repeatedly pointed out that the cost of MOOC production -- which can reach hundreds of thousands of dollars -- has created classes of MOOC producing and MOOC consuming institutions. This creates issues for both groups; the former doesn't want to appear elitist, while the latter rejects content not created by their own faculty members.
“Maybe this seems obvious,” said Christopher Brooks, a research fellow at the University of Michigan School of Information. “Lots of things seem obvious in hindsight.”

Or maybe, for some, in foresight.

3. In closer-to-home news, I'm trying the "append only a final comment" to their last papers based on advice you've all given.    The comment gives feedback on the paper, but I didn't put in any marginal comments. The students have all been invited (via the comment) to come and talk to me next semester if they want a more complete set of comments on their papers. Do my hands twitch to add marginal comments? Yes, sort of. Is the time tradeoff worth it? Yes.
Posted by undine at 5:10 PM 4 comments:

Aren't we all keeping the plates spinning about now, just trying to get through grading papers, or calculating grades, or turning in grades, or holiday preparations, or buying gifts, or baking, or cooking big meals, or sending Christmas cards, or seeing family, or writing up syllabi for next semester, or getting ready for the (still mercifully in January) MLA?

I want to turn my attitude around so that instead of seeing all these as points on an endless to-do list, or too many plates to spin, I see the relaxing or happy spaces in between.  I want to sit and concentrate long enough to shift focus and see the dancer spin the other way.

Posted by undine at 8:36 PM No comments: