Wishing you peace and joy and happiness in 2021

This isn't a traditional year-end post. There aren't any lists of accomplishments, because it feels as though I didn't do anything (certainly in terms of writing).  I'm grateful to have had a roof over my head and the luxury of working from home.

There's nothing ranked, like the best movies I saw or anything like that. In fact, I'm tired of rankings, evaluations, criticizing, and negativity in general. It's no fun even to read a snarky review. I've always hated the thing where actors go on a show and trash a movie that they just made (you made it, didn't you? and got paid? so shut up), and now it's like that with a lot of things.

My feeling is this: Someone tried. Someone put in an effort. Someone did something. If you want to be one of the cool kids about it and criticize, knock yourself out. I'm not a cool kid, never was, and am not joining that particular competition at this stage of my life.

Instead, I'm celebrating what little I did do, which is the bare minimum that we all did; those of you with kids or elderly parents are doing far more. I cooked and baked; the last time I had a meal out was February (except for a takeout salad in June). Except for masked trips to the grocery store every couple of weeks, I stayed home, even when all of Facebook was winging or driving its way somewhere this summer. When fall came and it was like the spring all over again, I got up every day,  put one foot in front of the other, fired up the Zoom camera, and reached out to students.

It's going to be a while before we're all vaccinated and the world returns to some form of normal (October is my guess), but we've at least got a good chance at it now. In the meantime, in with the new year, same as the old year, for now--but maybe with some more peace and joy and happiness, too. 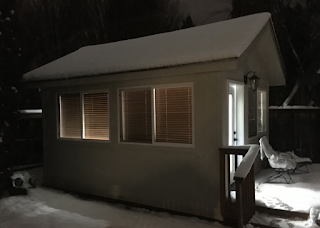 Thank you, Dame Eleanor! It's a consistent spot of joy.