I wake up writing 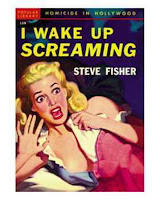 Not screaming, but writing.

Not as in "I make writing wake UP!" but as in "I wake up early, about 4 a.m., and since that's too early to get up, my brain busies itself by writing things in my head."

This morning's writing was about Sandra Tsing Loh's pieces for the Atlantic, and it was in response to Timothy Burke at Easily Distracted. Short version of my response: She's the humor component of The Atlantic, now that they've gone to an editorial policy of publishing only serious articles that tell us we're going to hell in a handbasket. If you're worrying because her essays don't have a structure, don't: they're really just long, ranty, and often funny blog posts, with moments of truth interspersed with outrageously solipsistic and just plain bonkers logic (e.g., my marriage is bad; therefore marriage as an institution is unsustainable). She's better than the totally bonkers Caitlin Flanagan who used to fill this role, so lighten up.

Sometimes it's a letter to the editor or to a congressman, or a screenplay, or a short story, or (too rarely) a new approach to the piece I'm actually supposed to be working on. Here are my questions: If you also wake up writing, do you get right up and write it down, even if it isn't something you're working on? Or does that take time away from your real writing?

[Update: Historiann has a new post about Sandra Tsing Loh.]
Posted by undine at 9:24 AM

If I "wake up" because my brain never turned off, yes, I get up and write whateverthehell was keeping me from my slumber. My brain likes to rearrange paragraphs and sentences at about 3am. There must be something in the way the magic pillows move words around my skull. It doesn't matter if it's an email or a paragraph for a paper. It. will. keep. me. up. Years of laying there has gotten me no sleep, so I get up, write or type (in the dark sometimes) the thought down, and go back to bed.
jc

Love Loh (I have always assumed she was the in-print blogger for The Atlantic!).

And since I rarely sleep all night, yes, I write in my head while I lay there, but no, I don't get up. Experience tells me that leads to 1. bad writing anyway and 2. no physical rest at all.

I always write it down, even if irrelevant to the day's tasks, because anything I'm thinking when I awake will stick in the exhaust pipe and block all my other work for all eternity until it's allowed to escape.
If i write it down, I can always come back, but it won't disrupt my day.
Annieem, keep a notebook by the bed, and scribble the basic info in the dark. What's legible is often useful. And it's just notes, so getting them out lets me sleep.
It's starting to sound like I'm the advocate for compositional fiber in your writing diet or something...

What makes me crazy is when I wake up at 2 am, after being half-asleep for awhile but aware that I'm revising in my brain. Then I realize that I've already turned in that piece. Waaaah!

Anyone else remember the Seinfeld where Jerry wrote the Best Thing Ever down in the middle of the night and then couldn't decipher his handwriting? That actually happened to me, too.

This doesn't happen much to me but I have learnt to write it down when it does before it gets lost in new sleep; it won't keep me awake, and then it'll be gone forever.

On the other hand, similar to what Ink says, when I was still at school the poet Michael Rosen did a visit and told a story, presumably fictional but hey, of a boy who'd dreamt the way to bring about world peace and wrote it down in his sleep, only to find the next morning that what he had written was "I am a sausage". A warning for us all I fear.

I go to sleep writing. I usually tell myself a story as I'm falling asleep -- or work on continuing a story that I've started before, since I usually fall asleep before I get to the end.

Yes, occasionally when I'm in the midst of the writing process I'll wake up and realize that I've been "sleep writing" or "sleep revising" -- but I have to say that' pretty rare.

And I never write any of it down.

annieem--That's the thing: physical rest. If you get up, you're up for the duration, until you have to do something at 9 a.m. and are exhausted.

naptimewriting, great image--"exhaust pipe." It really does block everything else, doesn't it, the sleep writing? I think I'll have to get a notebook if I can keep the cats from carrying away my pencils.

Ink, that's got to be the most frustrating thing of all--working on a piece you've already completed. I kind of remember that Seinfeld, too.

tenthmedieval, yes to "new sleep"; if I go back to sleep, whatever writing I was working on in the first sleep is gone. "I am a sausage": awesome, as bg says.

bittersweet girl, does writing stories in your head before you go to bed keep you up? I hear that scientists did this with problems so that they could solve them in their sleep.

I always write it down and yes it is bad for real writing in the short term. Not in the longer term, though.

Last night I was reading in bed as is my wont before nodding off and suddenly one paricular sentence leaped off the page and set a train of thought in motion. I kept writing away in my head at great speed too and in between the 'peerless prose' I thought of your recent blog post Undine and the comments it provoked and despite the warmth and comfort of the bed I dragged myself out and away to get pad and pen and then settled back in all ready to write ... and the pen was dry! Ne'er a word would it write. And no, I didn't get out to get another pen.

Next time I'll keep a voice recorder at the ready!

But I know that if it was not for that post of yours' wild horses wouldn't have dragged from the bed. So thanks for setting all that in motion. And amazingly the main thrust of the thoughts were still with me this morning.
pp

profacero, do you go back and use the writing later for the long term stuff?

PP--actually, seeing what everyone said in the comments has me using a notebook now, too. Glad you could remember the writing since the pen went dry.