If a crazy donor put up $200M to build a windowless dorm, with tiny rooms, would your university do it? 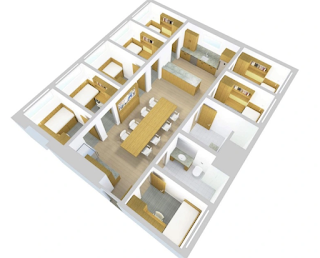 Short version: "97-year-old billionaire-investor turned amateur-architect Charles Munger, who donated $200 million toward the project with the condition that his blueprints be followed exactly."

These include the following:

When he's not reaching into the past for all kinds of inhumane social experiments for his inspiration, Munger apparently makes this offer to various campuses, and some have accepted (Michigan? Not clear.).

As is unfortunately typical of some university governance processes when money is involved, this was apparently rammed through without any discussion.

The consulting architect, Dennis McFadden, clearly a man of principle, has quit, because “in the nearly fifteen years I served as a consulting architect to the DRC, no project was brought before the committee that is larger, more transformational, and potentially more destructive to the campus as a place than Munger Hall.”

Let's recap: take students stressed out by a year of COVID. Warehouse them like lab rats and force them to interact. Provide not enough bathrooms. And fire drills in that place (how did this ever pass a fire code?) will be a real treat, with 4500 students streaming out the two doors at 2 a.m., unless prank fire-alarm pulling has vastly changed over the decades.

Wasn't there a lab rat experiment that proved what a bad idea cramming people into a windowless space could be?

And when sleep-deprived students show up in our classes, guess who will get to bear the secondary consequences?

Nothing could go wrong here, nothing at all.

P. S. With its steady drumbeat of "no offices for professors is the great future that awaits us all," I'm surprised that CHE isn't cheerleading this effort.

My university would not only do it, but the headmaster would do backflips of joy.

BUT HOLY BLEEP! What a horrid idea. And no, I can't imagine the plans can meet fire code standards, so that will be a problem.

Why oh why would anyone want to make human beings live in a windowless environment if they didn't absolutely have to????

While I agree with you on all counts, my first thought was about the windows in Santa Barbara with its glorious views---it's not like they're on a blasted heath. UCSB should Just Say No.

Bardiac--exactly! No one wants to live in a windowless environment unless they have to. And how could this possibly meet fire codes, as you say?

Dame Eleanor--had not heard of the Scholomance before, so thanks for that. The idea apparently is that they will get to see sun and light only if they want to hang out endlessly with others, which is another special kind of hell.

While I think that the megadorm is more appropriate as a prison than as a dorm, it may meet fire codes, as there are 6 emergency exits in addition to the 2 main entrances. As long as each exit has sufficient width for the 560-person load, it probably meets the code.