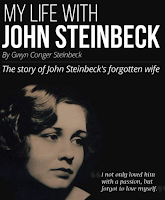 I don't think I could manage to feel inspired by such a jerk, though his writing habits certainly have much in common with those of other productive writers (and, for the record, I do think he was a great writer).

But (from the review) sitting down with current wife and girlfriend and saying he'd be with whichever one needed and wanted him the most? I can't believe they didn't both walk out on that confab. Mejor sola que mal acompañada.

Good luck with your writing and deadlines!

Dame Eleanor, I can't believe they both didn't walk out, either. I'm trying to separate the writing methods from the man, but it's a little tough with this one.