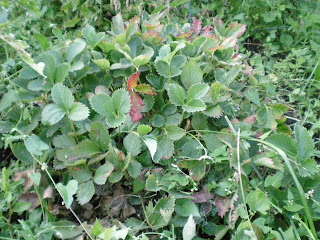 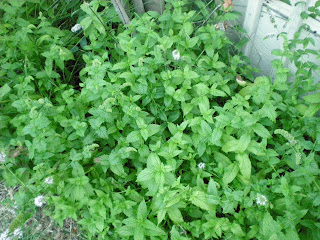 The Bittersweet Girl said that she would like to hear more about my garden, and, since I'm avoiding all thoughts academic right now, I thought I would describe it. It's in an 8' by 8' plot bounded by wooden garden rails or whatever they're called. Some vegetables and fruits are foolproof, and that's the kind I grow.

Tomatoes are pretty foolproof, so I grow a lot of them. Most of the garden usually consists of various kinds of tomatoes, with some heirloom ones like Brandywines and a few hybrid varieties like Sweet 100 cherry tomatoes. Guess which ones yield great tomatoes all summer long and which ones I end up pulling up, with green unripe tomatoes on them, in October after the heavy frosts begin?

Also foolproof: strawberries (picture). They stay there year after year, braving the freezing winter temperatures even if they're not covered by snow. There are no better strawberries than the ones you pluck and eat while they're still warm after brushing off the dirt.

In the foolproof but sneaky category: zucchini and lettuce. Zucchini will grow to the size of a very thick baseball bat if you don't discover it in time. If you let lettuce go, it will grow into a 3' tower. I didn't plant any zucchini this year, and all the lettuce got away from me except for a few bunches. I grew some peas this year, mostly because I found some seeds in the garage from about 10 years ago and thought I'd put them in the ground and see what happened. They grew really well.

Also foolproof: herbs and greens for salad. Right now I have burnet, sorrel, thyme, chives, parsley, a basil plant, cilantro, and lots of mint (picture). You have to put basil in every year, but the others are all perennials or self-sowing, so you don't have to do anything with them. I could have made a lot of salads just out of the garden (and have in years past) if the lettuce towers hadn't taken over when I wasn't looking. At various points in my life I've grown lots more herbs (borage, etc.), but that was back when I baked bread every week and kept a sourdough crock going, too, something that's not going to happen with school starting soon.

In short, if you're in the mood to have a garden but think you can't--well, you can't go wrong with these vegetables.
Posted by undine at 7:04 PM

I am so impressed by your picture. And you oh so casually make it sound easy. This year was my first attempt with some vegetables and it was only about 50% successful. But you give me something to hope for...(plus it might help if I moved to a different climate...)

I second Mel: you make it sound so easy! I am looking forward to trying my own ... but I'm also aware of my amazing ability to kill the hardiest plant, so I may be in touch next summer with plaintive cries for help.

Excellent. I will put in a real garden. I insist. I have random edible plants but not a full on vegetable garden and my goal is to not depend on the store for these things. My plants keep dying in the summer. It sounds outlandish but I think it's just too hot. I'm told winter gardens work better here. One of my colleagues reveals that in summer she grows vegetables and salad things indoors, in containers, aided by air conditioning. I find this utterly wild.

50% sounds about right for vegetables, Mel; I don't think I've had that many, although the tomatoes should start to tip the balance this month.

bittersweet girl, if you want something that can't be killed (but also isn't as useful), try mint. That picture shows mint that was weed-whacked to the ground earlier this summer; you just can't kill it.

cero, I still buy a lot, mostly at the farmers' market. I'll bet it does get too hot for gardening, though maybe just for growing vegetables.