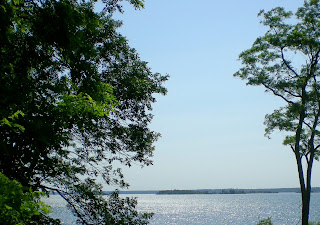 I'm back from the land of no internets and thought you might like a picture of where I was for some of the time. A few thoughts:
It's good to be back.
Posted by undine at 6:23 PM

Email ThisBlogThis!Share to TwitterShare to FacebookShare to Pinterest
Labels: daily life, land of no internets

That's such an interesting thought, the idea that, without technology, it really is possible to see life the way that our forebears did.

About a month or so ago, the power in my town went out for an entire night. I was in bed at 10:30, as opposed to two o'clock in the morning, which is when I normally retire.

Without the Internet and all of my electronic distractions, I found that there really wasn't much to do but go to sleep.

welcome back and yay for no more spiders!

I wonder if that's the key to more and better sleep, blackenedboy--less technology?

Thanks, justme! I'm glad for the absence of spiders, too.