I've just returned from a conference (not the Slayage conference, which judging from Rob Helpy-Chalk's description sounds really interesting) and am wondering what the rest of academe does with conference no-shows.

I don't mean those who say in a general way, "Sure, I'll be there; let's get some lunch." I mean those who have papers listed in the program and thus have prevented someone else from giving a paper on the panel--those no-shows. At least two of the panels had no-show panelists this time, panelists who apparently didn't call ahead or make any effort to contact the panel chairs.

There could be a genuine emergency, of course, but in conversations with colleagues I've heard that some people just want the notch on the belt--the name in the program--and pocket the money from their department. Not only did I not want to believe this (just call me Pollyanna), but I can't see how it's possible logistically; doesn't anyone else have to submit receipts?

So does this really happen, or is it just an urban myth?
Posted by undine at 7:25 PM No comments:

What San Francisco has, part II 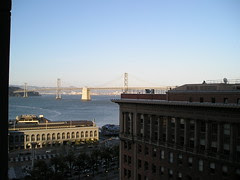 San Francisco 1
Originally uploaded by undines.
At the bottom of this building sits a man with his dog. He alternately talks to himself and growls at passersby in a gravelly voice, like a demented pirate in a baseball cap.
Posted by undine at 6:31 PM No comments:

What San Francisco has that Northern Clime does not 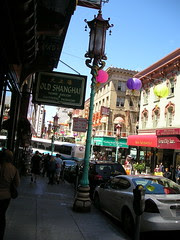 A street
Originally uploaded by undines.
Posted by undine at 6:29 PM No comments:

Another view of the falls 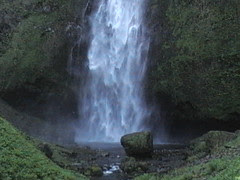 Another view of the falls
Originally uploaded by undines.
Anyone care to guess which falls?
Posted by undine at 4:43 PM 4 comments: 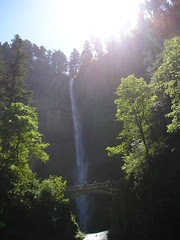 Falls
Originally uploaded by undines.
To a place where the falls are well worth looking at.
Posted by undine at 4:42 PM No comments:

New visitors from the Teaching Carnival--thanks for stopping by!

And if you're visiting from elsewhere and haven't checked it out yet, do visit Teaching Carnival IX at Adventures in Ethics and Science.
Posted by undine at 8:38 AM No comments:

What I'm doing, and what I'm not

Spending insane amounts of time working on my online course for this summer. Because I like to tailor the material to the students in the class as far as is feasible, the process of working on it takes forever: a few hours (at least two hours) for one discussion board assignment, for example. I know it's ridiculous, but that doesn't mean I can stop working on it.


What I'm not doing: working on a paper for the conference in a few weeks.
Posted by undine at 11:16 AM No comments:

I really shouldn't snark about Alex Golub's article at Inside Higher Ed because I basically agree with its unsurprising conclusions: you can be technologically literate and still prefer reading books in paper form, for all the reasons Golub mentions.

Actually, what it did was send me back to Benjamin's "Unpacking My Library":

The most profound enchantment for the collector is the locking of individual items within a magic circle in which they are fixed as the final thrill, the thrill of acquisition, passes over them. Everything remembered and thought, everything conscious, becomes the pedestal, the frame, the base, the lock of his property. The period, the region, the craftsmanship, the former ownership--for a true collector the whole background of an item adds up to a magic encyclopedia whose quintessence is the fate of his object. (Illuminations 60)

Although I collect books, I'm not a true collector in Benjamin's or anyone else's definition; I buy old books in order to read them and don't care much whether they're the first edition or a Grosset & Dunlap reprint. The Grolier Club is never going to beg me to join.

But I'm sufficiently enthralled by books to be dismayed at some of the things I've seen libraries do:

Parenting Lessons for the Syllabus Writer

A senior colleague and I were talking today about a student in the team-taught course who hadn't turned in one of the papers to the TA. I commented that she would get a 0 for the paper but might still pass the course.

Senior Colleague thought that failing to turn in a paper should mean that the student should fail the course. Although I've seen this on lots of syllabi ("To pass the course, student must complete all the papers"), I have never seen anyone actually fail a student just for this, although the student will often fail due to the 0 grade. I said something to that effect to Senior Colleague. His response: "That's what teacher discretion is for."

I admire Senior Colleague, and I applaud teacher discretion. I don't agree, however, because I hate--no, make that HATE-- "hidden rule syndrome."

"Hidden rule syndrome" means that you put draconian rules in your syllabus and then bend them according to the level of charm or pathos a student can muster to talk you into changing them. The best example is the "plagiarize a paper and fail the course" rule. Now, if an instructor actually does this, that's fine. What I have a problem with is the mentality that says "scare the bejesus out of the student with a rule and then relent when challenged."

This is where the parenting lessons come into play. As a mother of toddlers a few years back, if I saw one heading for a pair of scissors and said "Don't touch that," I knew that I'd better be ready to spring into action and take the scissors away--not to get angry, but just to take the scissors away. I had watched some parents who had a series of escalating threats for the situation ("Don't touch that!" "DON'T TOUCH THAT!" "DO YOU WANT ME TO COME OVER THERE?" "I SAID DON'T TOUCH THAT!") as the child serenely ignored them. The child knew that the parents weren't going to move, and the parents knew it too.

The toddler who has the scissors taken away learns that actions have consequences. Not anger, or scary punishment . . . just consequences. The second toddler sees no consequences and learns to ignore the threats.

So the parenting lessons I took away from that for the syllabus were these:

1. Make a fair set of consequences for student actions. Build in some escape clauses that the students know about (like dropping a quiz grade). Write them into your syllabus. Mean what you say.

3. Leave the drama to the experts.

Here endeth the sermon.
Posted by undine at 7:02 PM 3 comments:

How to Write/How Not to Write

Two good posts about writing: one at Daily Practice and the other at Just Tenured. The key for both is to keep writing, whether that involves starting the day with writing that can be "just practice" or keeping a timer going to keep you honest about your work.

I like both of these ideas (and the other ideas in the posts as well). When I've tried the timer method before, I tend to cheat: "Must check Expedia for air fares now," says my brain, or "You surely can't mean to go on with this piece of writing until you look up the serial publication data for this novel." My fingers comprehend this instantly and spring into action, and before you can say "Firefox" I've left the writing behind. My new plan is to note these traitorous brain flares on a Post-It and look them up only after the time is up.

The daily practice should be good, too. What happens too often with writing is that you start in the morning and end up borne away on a huge wave of unavoidable distractions--meetings, classes, and so on--until you wash up on the beach miles from wherever your ideas were earlier in the day. Daily practice might help to keep that early morning focus.
Posted by undine at 9:36 PM 1 comment: